Losing Weight Can Reduce the Risk of Diabetes 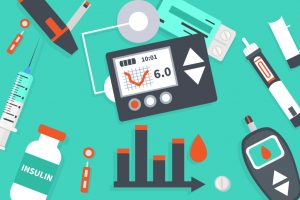 Diabetes can be caused by Obesity

Diabetes mellitus, is a group of metabolic disorders of carbohydrate metabolism characterized by high blood glucose levels (hyperglycemia) and usually resulting from insufficient production of the hormone insulin (type 1 diabetes) or an ineffective response of cells to insulin (type 2 diabetes). Secreted by the pancreas, insulin is required to transport blood glucose into cells. Diabetes is an important risk factor for cardiovascular disease, as well as a leading cause of adult blindness. Other long-term complications include kidney failure, nerve damage, and lower limb amputation due to impaired circulation.

As I write, The UK currently ranks as the country with the highest level of obesity in Europe, with more than 1 in 4 (28.1%) adults obese and nearly two out of three (63.4%) overweight. Over the next 20 years, the number of obese adults in the country is forecast to soar to 26 million people.

Type 1 diabetes: (formerly known as juvenile-onset or insulin-dependent diabetes) can occur at any age but often begins in late childhood with the pancreas failing to secrete adequate amounts of insulin.

Type 2 diabetes: (formerly known as adult-onset or non-insulin-dependent diabetes) is the more common type of diabetes, constituting 90 to 95 percent of cases. With this condition, insulin resistance renders cells unable to admit glucose, which then accumulates in the blood.

Health Experts have asserted that obesity (having a body mass index – BMI – of 30 or greater) or overweight often increases the risk of type 2 diabetes. In fact, obesity is believed to account for 80-85% of the risk of developing type 2 diabetes, while recent research suggests that obese people are up to 80 times more likely to develop type 2 diabetes than those with a BMI of less than 22.

HOW DOES OBESITY CAUSE TYPE 2 DIABETES?

It is a well-known fact that if you are overweight or obese, you are at greater risk of developing type 2 diabetes, particularly if you have excess weight around your tummy. Abdominal fat causes fat cells to release ‘pro-inflammatory’ chemicals, which can make the body less sensitive to the insulin it produces by disrupting the function of insulin responsive cells and their ability to respond to insulin – a condition known as insulin resistance.

Like I said, type 2 diabetes is strongly associated with obesity and is a result of insulin resistance and insulin deficiency. Insulin resistance is a very common characteristic of type 2 diabetes in patients who are obese, and thus patients often have serum insulin concentrations that are higher than normal. However, some obese persons are unable to produce sufficient amounts of insulin, and thus the compensatory increase in response to increased blood glucose concentrations is inadequate, resulting in hyperglycemia.

HOW DO I PREVENT OBESITY?

The links between obesity and type 2 diabetes are firmly established – without the intervention of a healthy diet and appropriate exercise, obesity can lead to type 2 diabetes over a relatively short period of time!

The good news is that reducing your body weight, by even a small amount, can help improve your body’s insulin sensitivity and lower your risk of developing cardiovascular and metabolic conditions such as type 2 diabetes, heart disease and cancer.

According to the NHS, a 5% reduction in body weight followed up by regular moderate intensity exercise could reduce your type 2 diabetes risk by more than 50%.

About the Author: DrG